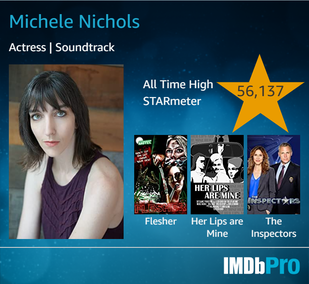 Actress & classically trained singer known for playing strong characters of acerbic wit. Known for her striking facial features, she started her career off as a child model after winning a local modeling competition. She soon set her sights on music and acting.

Her first film Cuffed went on to premiere at the MAGA Film Festival. She has appeared in films such as the 2011 Macon Shorts Winner Final Acts & Honorable Mention The Razzle, Trouble with the Curve with Clint Eastwood, Marietta Film Festival Winner Ghost Witch, and 42 with Chadwick Boseman. A series of horror films put her in the film festival circuit including 2018 Crimson Screen Film Festival Audience Winner What Becomes of Us & the stand alone short Max Croft. She plays Teresa in the slasher film Flesher which has won over 6 awards in the horror festival circuit including the SCUFF International Film Festival, Independent Horror Movie Awards, And Mad Monster Film Fest.

Her voice over credits include the Narrator of the Mom's Everyday Talk Show & commercial voice over artist for KMOT-TV. She voices the lead role of Sandy in the 2019 DragonCon Animated Shorts Winner Her Lips Are Mine. She also appeared as a special guest on the Military Wives Special for the Oprah Radio Show on SiriusXM.

Her educational stage credits include The Wizard of Oz as the Wicked Witch, A Midsummer Night's Dream as Titania, and Twelfth Night as Viola, and The Women as Peggy Day. Her regional theatre credits include Murder Americana: The People Vs. Lizzie Borden as Nance O'Neil & Treasure Island as pirate Anne Bonny. She's a producer & improv actress with The Dinner Detective Murder Mystery Dinner Theatre Show, the largest improvisational murder mystery dinner theater company in the U.S.

As a singer she has performed all types of genres in many different venues, performing in bands, studio settings, industry events, stage & film. Her credits include the opera H.M.S Pinafore, the film Church of Redemption, background vocals for singer-songwriter Fleming Moore, soundtrack credits for the films Church of Redemption & Little Cooper, and National Anthem Singer for the 2017 Volvo Car Open on the Tennis Channel. She is also a contemporary Christian singer with Awaken Columbia Church Worship Team.

Throughout her life she has also been an avid writer. She was published in small magazines throughout high school & college. She wrote & directed her first short film Reinvent Yourself for the Modcloth Style Short Film Competition. She continues to do freelance writing and lends her personality to the Michele Nichols Sings Acts Reviews YouTube Channel.

She continues to evolve her singing, acting, and writing career & is represented by Millie Lewis Models & Talent.

Catch her on Season 4 of CBS's The Inspectors. Watch out for her in the upcoming horror film Flesher. Listen for her lead role in the animated horror short Her Lips Are Mine  She is currently a castmember & associate producer of the improv based theatre company: The Dinner Detective Charleston. See her sing live with Awaken Church Columbia Worship Team Contemporary Christian Band. She also works as a chorister, show band, oratorio, industrial, and session singer.
To see a full list of credits, please visit the Film, TV, Internet, Theatre, Industrial, & Music pages on this site or visit her IMDB page (Button at top).